Western Sandpiper was one of the birds I wanted to see most on a late October 2016 trip to Cape May County, New Jersey. Thanks to a tip from Richard Crossley I found out a few could still be found feeding among the Dunlin flocks on the outer beaches in late October. And also thanks to RC for discussing the difference in moult of Western vs Semipalmated Sandpiper in October which was already spelled out in the great book The Shorebird Guide (O'Brien, Crossley & Karlson 2006) had I cared to read that part!

I was lucky on my first visit to North Wildwood.  Among a mixed flock of 2500 Dunlin, Sanderling, Red Knot, Black-bellied Plover and a few Short-billed Dowitcher were about 30 Western Sandpipers. On two subsequent visits I saw only another half dozen Western Sandpipers among smaller groups of shorebirds. It was all about being there at the right stage of the tide.

Enjoyed superb views of the Western Sandpipers with binoculars and the scope. The rising tide brought the birds in around me. It was heaven for a couple hours on 24 October. Even winter plumage Red Knot and Short-billed Dowitchers were a novelty. 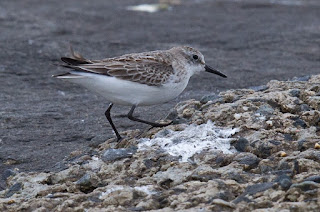 Here is a juvenile Semipalmated Sandpiper at Avalon, NJ on 27 Oct 2016. Note there is a mix of winter plumage plain gray feathers among the mostly scaly pale-edged juvenile plumage scapulars. A Western should never look like this in late October. All the feathers in the back (mantle and scapulars) should be plain gray with diffuse paler tips in a Western, not sharp pale fringes creating the scaly effect showing in this Semipalmated Sandpiper. Before you can clearly understand this you have to know the difference between the wing coverts and scapulars. Check the Introductions in any bird guide for this information.  The wing coverts of both Semipalmated and Western Sandpiper are 'scaly' in fall and winter.  This Semipalmated Sandpiper was considered on the late side for New Jersey. It was one of only two that I saw. I think we get more of them hanging on to the end of October in Newfoundland.

Below is a series of Western Sandpiper photos taken at North Wildwood, NJ 24-28 Oct 2016.  Note the pale gray mantle and scapular feathers. The scapulars often appeared long and partially covered the wing coverts. Of course the bill is the traditional star feature of the Western Sandpiper. On the longer billed birds the bill length and shape was impressive but this was not the norm among the birds I saw. Most had bills easily matched in length by Semipalmateds that we get in Newfoundland. But there was subtle difference in the bill shape. The way the broad base was glued abruptly on to the face then tapered a little as it curved near the tip.  You could describe some of our Semipalmated Sandpipers the same way but there was still a subtle difference in the bill shape of all the NJ Westerns that I saw but is hard to describe. The front end heavy body look described for Western Sandpiper was apparent and helped a lot in making the Western Sandpiper a very different species than a Semipalmated Sandpiper while still kissing cousins. Also I noted a difference in the way the Westerns were feeding. They would often stop and pause for a fraction of second a bit like a Semipalmated Plover.  Whereas Semipalmated Sandpipers are like a wound up toy and never stop walking. Don't know if this is a routine feature of Western but it was consistent with these NJ birds.

All of the sandpipers below are Westerns. The setting sun warmed up the actual pale gray backs in some shots.      Dig in! 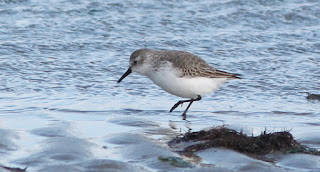 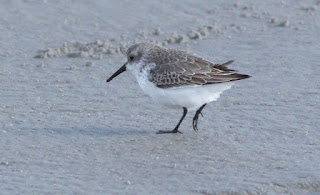 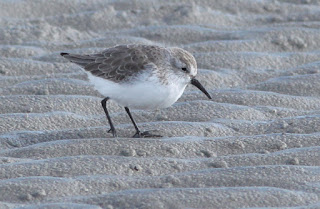 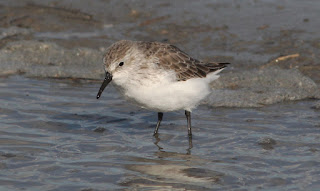 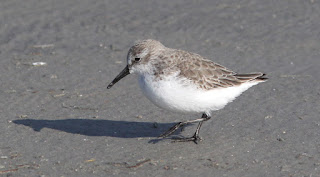 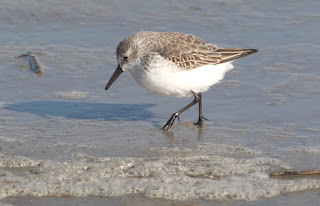 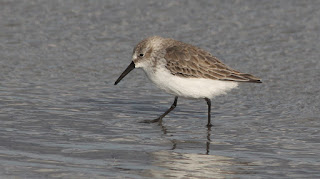 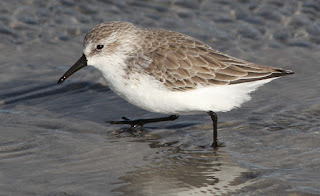 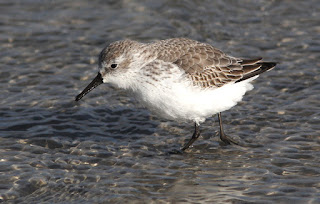 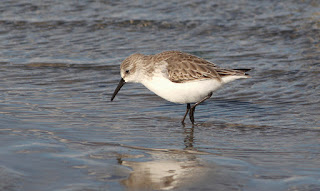 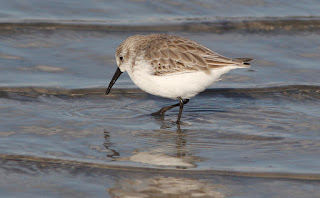 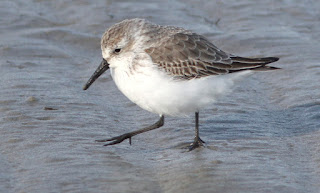 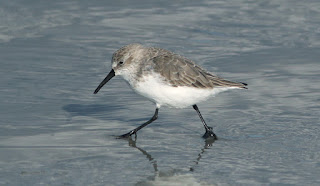 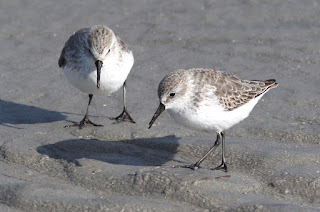 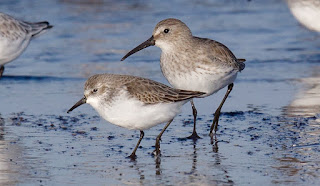 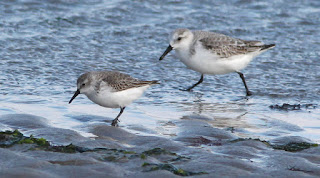 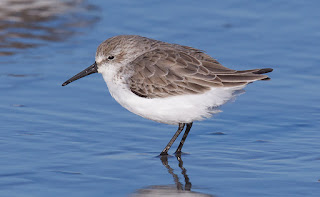 If only they all had bills like this beaut.
Posted by Bruce Mactavish at 18:23