Trust Me - This is a Yellow-legged Gull - Probably

Identification of the Yellow-legged Gull is like splitting an atom. It is a halfway gull, halfway between the Herring Gull and Lesser Black-backed Gull. The identification of out of range Yellow-legged Gulls must deal with proof it is not a hybrid  HERG x LBBG. A gull with half its genes from a HERG and the other half from a LBBG creates a YLGU look-alike but does not make a real YLGU.

St. John's gets the lions share of the North American Yellow-legged Gull sightings because of its relatively close proximity to the Azores. The majority of YLGUs identified in St. John's match the smaller and darker race (atlantis) from the Azores.  There is a theory that part of the year Azorean YLGU follow tuna schools out to sea. In mid to late summer tuna reach Newfoundland waters on the southeast Grand Banks and adjacent areas possibly bringing YLGUs with them.

The easiest YLGUs to identify are the adults in winter.  Their white heads stand out from the streaked heads of the other large gulls gulls in winter. This combined with that beautiful rare shade of gray plus details on head and bill shape, leg colour and wing tip pattern - all subtlety different from both HERG and LBBG, add up to create a YLGU which really does feel like a different species and not just a version of LBBG or HERG.

The first YLGU(s) of the season are often discovered in late August or early September loafing in the ballfields and other grassy areas among the buildings and old military housing units on the north side of Quidi Vidi Lake.  At this time they are not a pretty sight with a dirty streaked head and missing outer primaries.   The rare shade of gray on the upper parts, head and bill shape, pattern of head streaking and yellow legs come together to create that warm fuzzy feeling when you are pretty sure you have the real thing.

On 11 September Alvan Buckley photographed a suspicious gull at Quidi Vidi lake that when passed around to the St. John's gull fans was highly suspected of being a Yellow-legged Gull.  Late Sunday afternoon (14 Sept 2014) I saw the same bird in the same field off Janeway Place.  Right away I felt that warm fuzzy feeling starting to grow. We've seen this before in later summer. That rare shade of gray on a gull with a distinct ball cap shaped patch of head streaking and a stumpy rear end caused by a shortage of outer primaries. And of course yellow legs.

I did not have my 600 mm lens with me but my warbler lens (300 f4) plus a 1.4x converter came in handy.  The correct shade of gray is impossible to create accurately on every computer. My computer used for downloading and processing photos is very bright and sharp. When I save those pictures and bring them to this laptop used for emailing and blogging, the pictures are duller and the gray is bluer and darker. You can not win.  Below are two slightly different versions of the same photo. 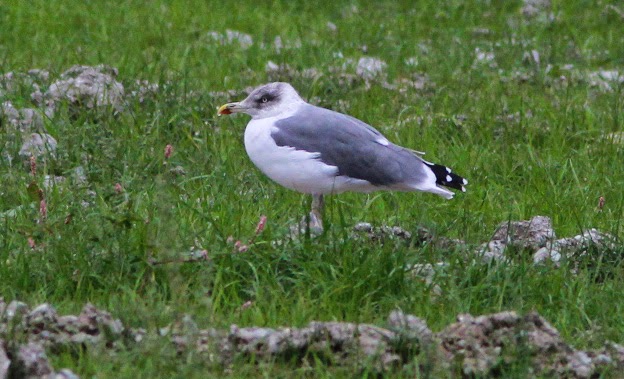 Two versions of the same picture in an attempt to illustrate the correct shade of gray on the upper parts. Note the head streaking concentrated in a ball cap shape on the forward part f the head. This is typical for YLGU and unusual in other large gulls. On a relaxed YLGU this head shape with a steeply rising forehead, level topped head and steeply dropping nape is classic YLGU. But when feeding or active this shape is often lost. 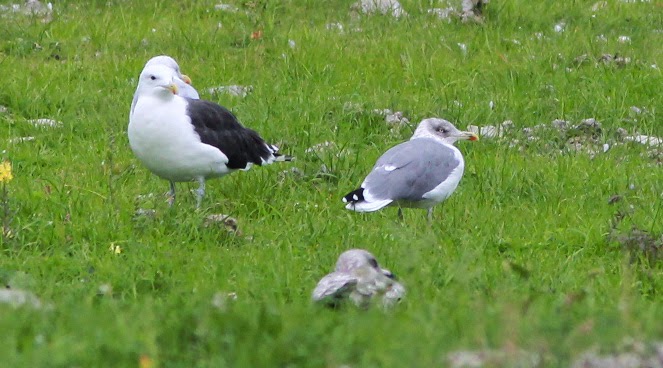 Next to a GBBG for comparison.  A nice view of head profile and pattern of head streaking. The bill shows black markings and pale base because it is a third year bird (hatched in summer 2011). 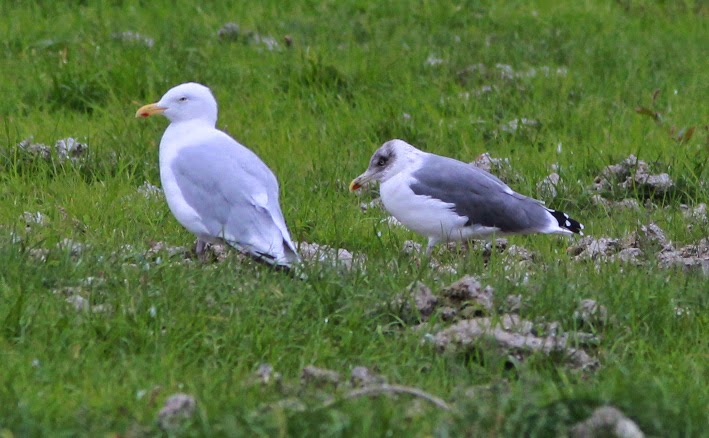 I hesitated to show this picture next to a Herring Gull that appears overexposed in this photo.  It makes the difference look too great between the mantle colours. The YLGUs that occur in St. John's are typical a little smaller than the average local Herring Gull.  The culmen or tip of the upper mandible drops abruptly to bill tip, more so than typical for HERG or LBBG. Not easy to see in these photos.

A wing stretch reveals lots of information. The extensive black marks on the primary coverts and alula along with the black marks on bill are good evidence this bird is just a year short of being an adult.   If you look close the white tips of P10 and P9 are visible by the primary coverts and there is a dark mark on P4.  The sharp contrast between black of wing tip and the rest of the wing is strong on both the top and underside of the wing. This is standard for YLGU, HERG and HERG x LBBG hybrids (!) but not LBBG 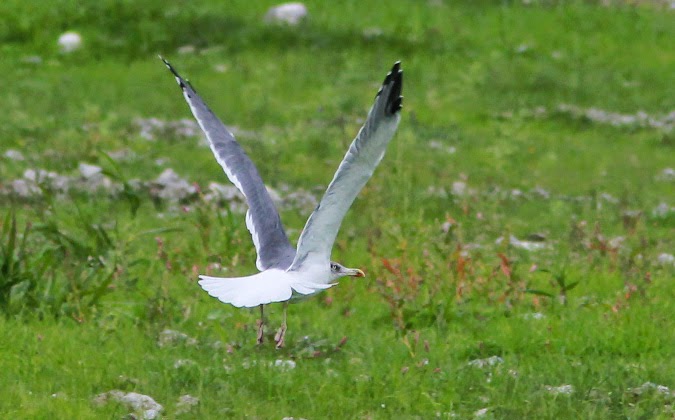 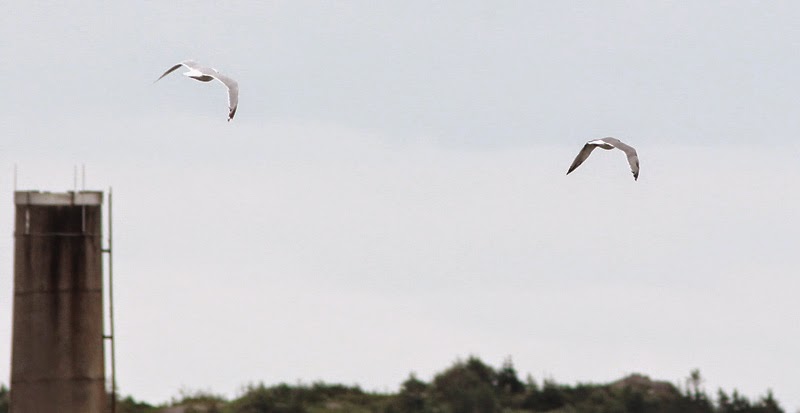 A passing eagle put up the gulls just as I was getting started.  Flying away at a distance shows a fairly life like comparison of the upper part colours of HERG (left side) and the YLGU. 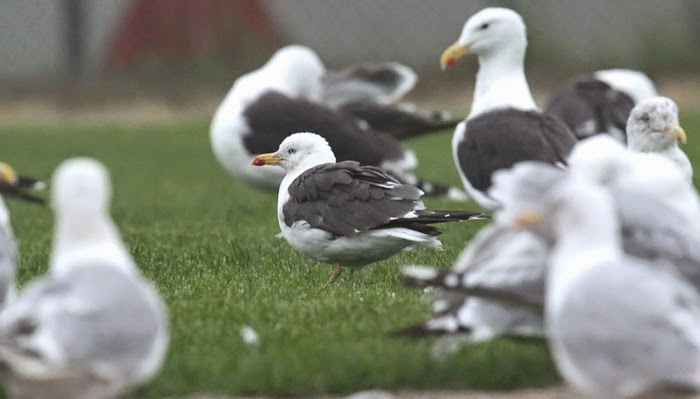 For reference, two fields away and two days previous was this adult Lesser Black-backed Gull.  In early September the adult LBBGs typically have white head and most or all of their old unmoulted primaries.