The St. John's CBC held on 26 Dec 2013 under blue skies, light winds, deep snow and cool temperatures was picture perfect day for February!  Waay too much snow on the ground for this time of year. The count total of 60 species was 15-20 species below the recent averages. There were no warblers, no waxwings, no wigeons - no wow factor.  Despite a heavy cone crop finches were rare. And with all these dogberries only hundred or so robins.  The early freeze sent many city ducks packing which is probably a good thing. Wigeons need grass to graze on.  Hopefully the 60 wigeon (half AM, half EUR) migrated to some place where they could live. The Eurasian Wigeon that have been wintering here in numbers for the last 10-15 years of warm winters probably have no idea where to go when it gets cold in St. John's. Hopefully the Americans will lead them to greener pastures.
There is concern about the Tufted Ducks. Most of the scaup that try to overwinter in the little areas of open water at the St. John's ducks ponds departed when things froze. But the Tufted Ducks didn't go. They've never been anywhere else. They migrate to St. John's, presumably from Iceland, and winter here in an artifical setting.  Numbers have been building every year. This year there was a significant increase from the 55 last winter to 78 this winter.  They are all crammed in a tiny pool of water at Burtons Pond that can hold a maximum of 80. They don't eat. If it gets colder and snowier where will they go? Will they expire? It is survival of the fittest and smartest. Birds are always experimenting, trying to expand their ranges.  Will this winter put an end to St. John's as being a wintering destination for Tufted Ducks? It should. St. John's is not a fit place for Tufted Ducks to overwinter.  It is a marginal existence at the best of times.
While it was mostly doom and gloom all around (LOL) there were some bright-ish moments.  The group that I was part of with Ken Knowles and Jared Clarke were surprised by a flock of 8 Lapland Longspurs at the dump.  The species is an October migrant with very few during winter.  A Red-throated Loon, again an October migrant through St. John's with very few stopping becuase of the deep water and rocky bottoms, was genuine surprise in St. John's harbour where any loon is unsual at anytime. 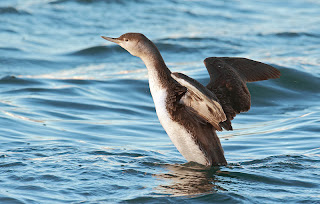 This Red-throated Loon in St. John's harbour on the CBC was in an unusual location at an unusual time of year and provided unusually excellent photo opportunities. 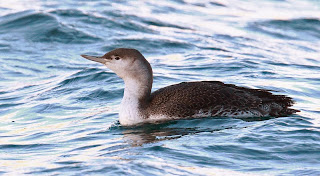 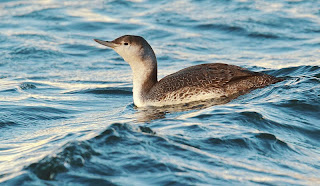 The bird below is a Common Loon for comparison. It was photographed in St. John's harbour the day after the CBC. While a common wintering bird on the Avalon seeing one within the harbour is an unusul event.  Great Cormorants and Black Guillemots regularly feed in the harbour, maybe loons should too. 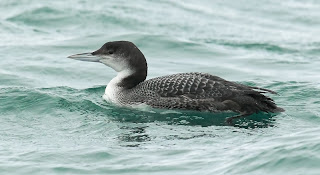 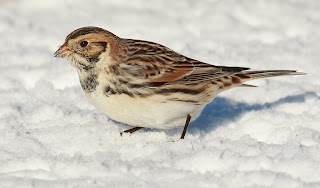 The wide open grassland plains created at the St. John's landfill perhaps enticed a group of eight Lapland Longspurs to stay for Christmas at least. 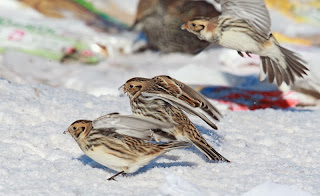 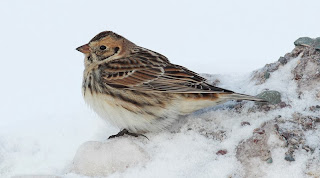 Posted by Bruce Mactavish at 23:43