With Christmas shopping all done and official holidays from work in effect, Christmas Eve was a free time holiday.  Perfect time for gull watching at Quidi Vidi Lake.  Spent most of six hours watching the mouth of the Virginia River where gulls were coming to bath and drink.  Did not see any rare species but there were, as always, a number of rule-bending gulls seen. Just two gulls are presented here. Both are adult Herring Gulls.
The first three shots are of a Herring Gull in breeding plumage with a completely white head, brightly coloured bill and bright marigold yellow-orange orbital ring. White headed Herring Gulls are rare but not unheard of in December in Newfoundland. Typically the first white headed gulls begin appearing by mid January but are pretty rare until the last days of January. During the first week of February white headed HERGs become regular and quickly become more common every day of the month. Just so happens it was an individual with extensive white in the primaries. 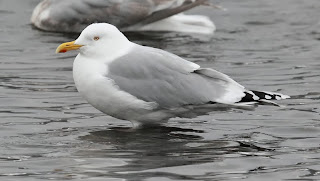 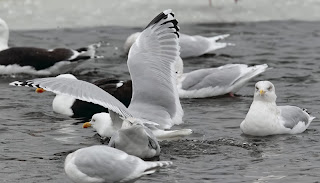 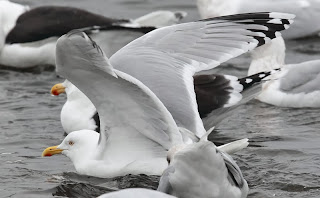 In the fully spread wing note the mirror on P9 easily meets with the gray finger of inner web and the small black marks on P5.
﻿
The second bird is a Herring Gull in full winter plumage typical for the time of year but with even more white in the wing tip including a broken subterminal bar on P9 which is very uncommon. 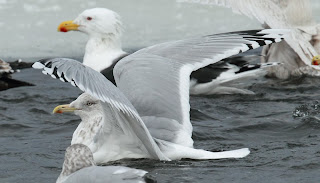 Posted by Bruce Mactavish at 16:19