Over night on 26/27 September 2013 a NNE gale with fog and rain pushed large numbers of seabirds into Conception Bay, Avalon Peninsula, Newfoundland.  When this happens, (couple times per autumn) some seabirds get trapped by the force of the wind in Holyrood harbour at the very bottom of the bay. This means good seabird watching for birders who get there in time, i.e. when the storm is still at full force. I arrived at Holyrood at dawn on 27 September in the teeth of the gale.  I parked the car on the shoreline in the shelter of a solid spruce tree. I opened the window and witnessed a spectacular seabird show from the comfort of sitting in the car.
I estimated 20,000 Leach's Storm-Petrels were trapped in the harbour. Up to 250 jaegers were in sight at one time on the water and in the air, with at least 400 tallied during the morning. Strings of Red Phalaropes (2000+ total) were flying in one side of the cove and out the other side. A rare Sabine's Gull was the star rarity of the event.
Trying to capture the essence of the extravaganza with a camera was challenging. The high winds, fog and rain made for very poor light conditions.  A wide angle lens would have helped.  Below are a few chosen photos of the many taken with a 600mm lens. None are field guide quality. 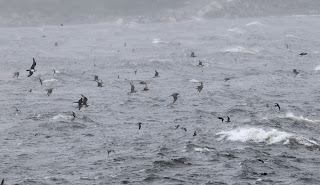 Swarms of jaegers and Leach's Storm-Petrels fight the force of the wind to avoid being blown into the woods at the back of Holyrood harbour. 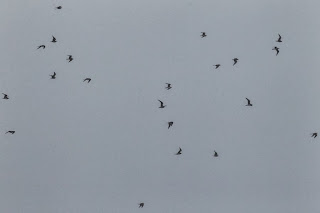 Sometimes the jaegers would rise high in the air as if to get a visual on just where they ended up during the stormy hours of darkness. There must be a way outta here. 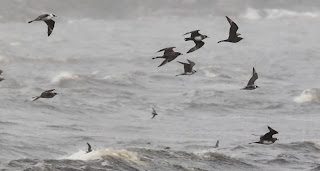 The seven Pomarine and one Parasitic Jaeger (second bird from right) in this photo pretty well summarizes the overall species ratio of the 400+ jaegers seen during the morning. 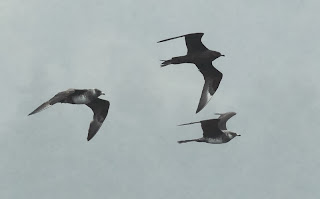 Adult Pomarine Jaegers - one dark and two light morphs. None of the adults were in pristine breeding plumage.  Tail projections were in various stages of deterioration.  The bodies of light morphs were showing barring of winter plumage. Only a couple of juveniles were confirmed. It is a mystery why juvenile jaegers are almost rare in Newfoundland waters, near shore and offshore, compared to the numbers of sub-adults and adults 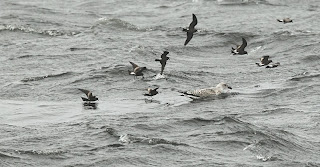 Large gulls were having a field day catching the Leach's Storm-Petrels. Here live Leach's are feeding on the oil slick created by a Great Black-backed Gull eating one their cousins!

Strings of Red Phalaropes streamed by the Leach's Storm-Petrels which for the most part were just holding position in the bay. The Leach's also appeared to be feeding on zooplankton concentrated in Holyrood harbour by the wind. 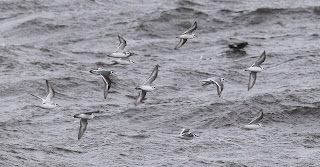 There was the constant 'pik-pik' sound of Red Phalaropes flying by the car. 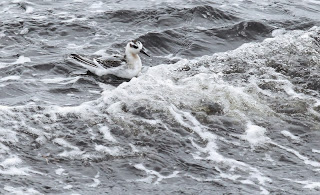 A few phalaropes stopped to feed, but most just kept going, heading back toward the safety of the open sea.

The prize rarity of the event was this juvenile Sabine's Gull that reappeared several times over the period of an hour. The species is rarely observed from land in Newfoundland. 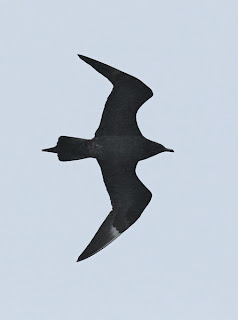 A dark morph adult Parasitic Jaeger knives into the wind past the car window.  Just one of many great moments of a constantly entertaining five hours at Holyrood.  It won't be the last seabird show at this locaiton.