It doesn't matter how many Gyrfalcons one sees, they never get boring. In fact they are highly addictive. The more you see, the more you need to see another one.  When four veteran Newfoundland birders (Ken Knowles, John Wells, Chris Brown and I) with many Gyrs and great Gyr experiences under our belts over the last several decades were on the Cape Race road on Sunday we were actually talking about Gyrs. When would our next one be? It has been a long time. We recounted the Gyr Years of the early 1990s when for several winters in a row there were so many Gyrfalcons around the St. John's area it was just a matter of going outside. The only question was what colour morph would you see today, with the full hattrick being highly possible.
It was an exceptionally beautiful morning at Cape Race on Sunday. There was absolutley no wind and a magical light created by thin partly broken overcast. Spirits were high. We were birding well, checking the areas but not finding any surprises. We had just finished covering the Long Beach area when someone looked back up the road we'd just come down and noticed a hawk sitting on a hydro pole. Judging by size through binoculars it was expected to be a Northern Goshawk or Peregrine Falcon.  Two people with scopes already set up took a look but were not saying anything.  They weren't seeing the eye line of goshawk or the moustache stripe of pregerine. It seemed to be a falcon. It was not close and we were looking back into the light glare from the low sun.  Then there was the phrase, "This looks like a Gyr".  At first we knew it couldn't be a Gyr and there must be some other explaination.  We took turns looking through the scopes.  Like a match dropped into a gasoline tank our adrenaline levels shot through the roof as we all came to the realization at the same time that  IT WAS A GYRFALCON.
We carefully leapfrogged the two cars up the road not wanting to flush the bird or miss seeing it fly.  Then a pickup truck drove right past it with no reaction from the bird. We drove ahead and parked the two cars where the road was closest to the pole.  For an hour it stayed there. Maybe it had just come in off the ocean and was resting.  The looks were fabulous through binoculars and microscopic from scopes set up in the car.  But I was hurting for not having my 600mm lens and 2x converter with me. How sweet it would have looked with all that power in the perfect lighting and endless time to try various camera settings. When birding in someone elses car I often do not bring the big lens because it takes up a whole seat. And when vagrant hunting I like to carry the 300mm f4 cause I can have it on me 100% of the time and be always ready to document rarities.  Yes I lost sleep thinking about what could have been but I am overall very happy with the experience.
It started hunting and moved a few poles east and farther back from the road.  After 90 minutes we left with the bird still present and a warm buzz in our chests that lasted into the next day. Maybe this early Gyrfalcon will be the start of something. 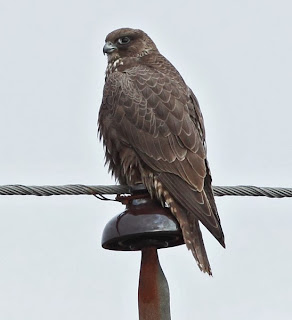 Lots of careful cropping and playing with Photoshop was required to blow this bird up from the small image in the camera. You get the gist of the bird!! 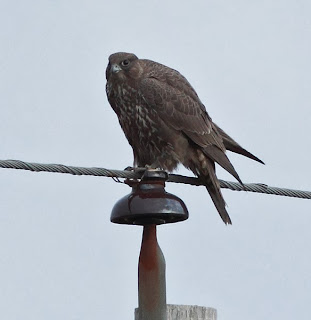 A quick view of the front of the bird as it shifted positions. The blue cere, blue orbital ring and blue feet mark it as an immature bird, probably hatched this year. 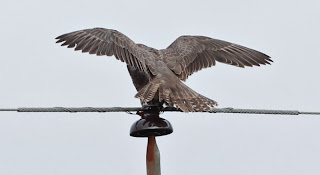 The frayed and broken ends to the tail feathers is a strong indication this bird spent a long time in a nest this summer. 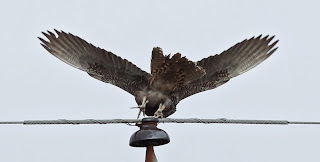 When the underwing coverts and breast show more dark than light areas then it is a bona fide dark morph bird according to the Mactavish Rating of Gyrfalcon Colour Morphs. 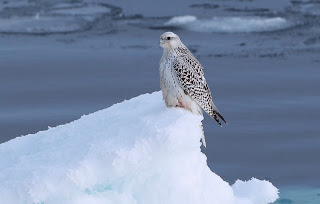 The ultimate Gyrfalcon is the white morph. This one was from northeast Greenland on 15 Sept 2011. The Mactavish Rating of Gyrfalcon Colour Morphs gives this a 4 out of 10. A Code Ten white morph has a pure white head, pure white under parts and  unmarked pure white tail. Such birds do exist.

Posted by Bruce Mactavish at 17:15