Since late October there has been a leucistic aythya hanging out with the scaup and Tufted Ducks at the various ponds within the city of St. John's.  Identification to species changed like the day of the week. Today I had my first point blank views of the bird while at Burton's Pond and feel it is a Tufted Duck.  The head shape now looks right for Tufted Duck being flat topped with a steep forehead and beginnings of a tuff on the back of the head, like that expected on an immature female at this time of year.  Circumstantial evidence is that it was sticking with a pure flock of Tufted Ducks (14 today, 31 yesterday).

The leucistic Tufted Duck with female Tufteds.  The long crests on the normal coloured birds indicates adult females. The leucistic individual has a small hint of a crest like some other birds present. These are presumed to be immature females. The steep sloping forehead, relatively flat topped head (changes depending on state of relaxation) and beginnings of  tuff are right for an immature female Tufted Duck at this time of year. 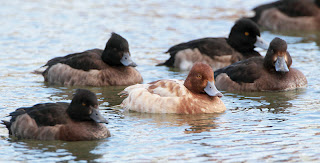 The dark coloured nail was a little smaller than the other female Tufted Ducks and actually quite similar to the size of dark nail present on female scaup.  It is important to note the bill is overall cleaner and paler than normal female Tufted Duck and scaups.  It is possible the pale bill marking corresponds to the pale plumage .
﻿

The leucistic duck fit in well with the pure flock of Tufted Ducks.
For the last two days a Pied-billed Grebe has been frequently the boat basin on the south side of The Narrows of St. John's harbour. These grebes regularly move to saltwater when forced out of freshwater ponds by ice. 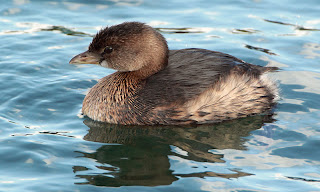 This Pied-billed Grebe is taking a break between dives in a sheltered part of St. John's harbour. 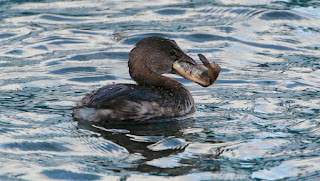 Who is eating who?  The grebe caught a blenny-like fish that should be idenitiable from the photos. 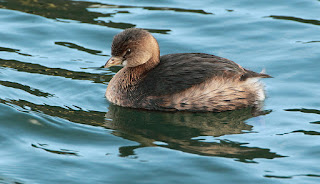 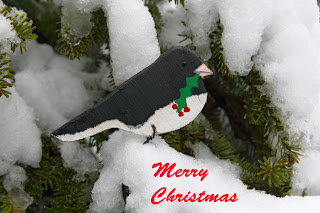 Posted by Bruce Mactavish at 15:42