The St. John's Christmas Bird Count happens on Boxing Day as 40+ years of tradition dictates. The day after Boxing Day is winter lister's clean up on mega sales on rare winter birds.  I had three birds on my shopping list when I left home just before sunrise. Townsend's Warbler, Northern Mockingbird and Hermit Thrush.   First stop was nearly a four (4) minute drive from my house. The province's 16th TOWNSEND'S WARBLER had been found by John Wells and Chris Brown on the lower most Waterford River on the Boxing Day.  This was more than just a winter bird, but a bird rare enough one just had to see it.


I heard it chipping at sunrise where it probably came out of night roost but it was an hour after sunrise that I finally locked eyes on this incredible Newfoundland rarity.  There were just a few small spruces along the birch lined river banks.  This what the Townsend's targeted. It stuck to the densest part of the branches making it difficult to even glimpse and a big challenge to get even a record shot of.  The bird is becoming so familiar. It wasn't even a provincial year bird.  This was the 11th record for the Waterford Valley since 1983.  It has long boggled the mind why a stripe of land 2000 x 300 m in Newfoundland has more records of TOWA then almost every state and province in the eastern half of North America. 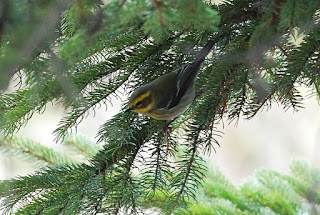 Seeing the Townsend's Warbler was challenge enough, getting even just a record photo was even more problematic, but it was accomplished.
Winter bird shopping list, item #2 was a Northern Mockingbird that Alvan Buckley and group found in holly hedge on Roche Street.  Knowing how mockingbirds can sit for eternity under cover I didn't have high hopes on seeing this bird in the small amount of effort I was prepared to put into it.  It turned out OK. I had only one leg out of the car when it flew up out of the hedge and into the crown of a bare maple.  Tick # 2 on the shopping list.﻿ 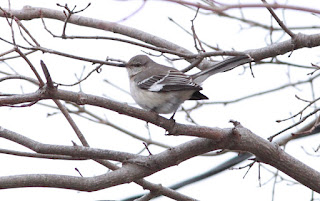 The mockingbird played fair game letting me see it right away instead of having me come back a dozen times for a trying for a glimpse.
The Hermit Thrush also found by the AB team seemed a very unlikely refind. But Alvan said it should be easy to refind. I trusted his instinct. I didn't know there was this lush little wet green spot in the woods on the upper Rennies River. It is definitely a place to be checking every year.  The poor bird had a bill malformation which probably explained its exception December appearance in Newfoundland. It did catch a good number of something in the leaf litter. 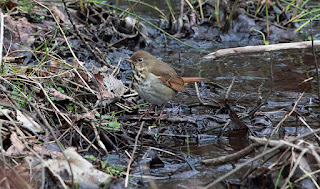 The Hermit Thrush is a common summer bird in Newfoundland but is rarely seen beyond October.  This was a very unexpected find on the St. John\s CBC.
Three out ot three birds on the post Boxing Day sale list was excellent for my Kill Tingley quest. His list was stalled at 106 while my list had soared to an early 112. With my shopping list full, I kept on birding.  Went to Burton's Pond to count the Tufted Ducks.  There were 5 Lesser Scaups and a very impressive 49 Tufted Ducks in the open hole of water. Got to get back to these birds for photos of the brown birds and the young males.
At the HSC pond I was pleased to see the wigeon flock of 12 was grazing on the lawn by the roadway.  I never get tired of looking at mixed flocks of wigeon. The two species compliment each other. This flock was 66% Eurasian.  A dog flushed the birds into the pond.  Close enough together I was able to get a photo with all birds.
﻿

This flock of wigeons (4 AM, 8 EU) swims back to shore after being flushed away from grazing on the lawn in front of the hospital.
When the flock arrives ashore they disturb a Hooded Merg that must have been resting there hidden in the grass. This species is a mild rarity and has not been seen in St. John's for nearly two months. A nice surprise for the winter lister.  While watching the merg a call came in saying a Yellow-rumped Warbler was found by Townsend's Warbler hunters.  This would be my 9th species of warbler for the month of December.  I did drive across town and found it -  # 114 for the winter list ﻿ 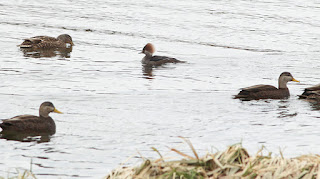 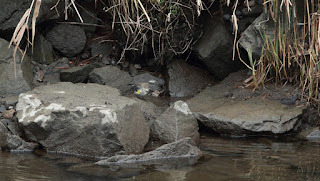