Happiness is not a Redstart in November

November is warbler month in St. John's. A lot of rare warblers have been found in the city during the month. The Rennies River and Waterford River - streams/creeks flowing through the city are the two proven areas. Living in the Waterford Valley it is partly my duty to put in an effort to check for warblers. There are fewer warblers these years and fewer people looking so the end result is maybe 1/4 as many finds as we had during the start of St. John's November Warblering some 30 (!) years ago. This morning I started in the lower most Waterford Valley where the river is partially tidal. I walked up the trail nearly to Bowring Park and then back down the other side of the valley. Three hours and 15 minutes of hunting warblers produced just one warbler. The high west winds roaring down the valley reduced the radius in which birds could be heard. However, I encountered some nice feeding flocks of juncos and chickadees where a warbler would have been comfortable.
The immature male American Redstart was by the Waterford Lane Bridge in the backyard of Waterford Manor feeding among a large flock of juncos and a couple of Black-capped Chickadees. While a very attractive bird to see in November there was sadness attached knowing this bird is probably not going to ever leave the Waterford Valley. 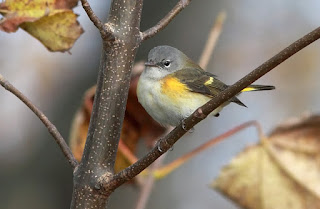 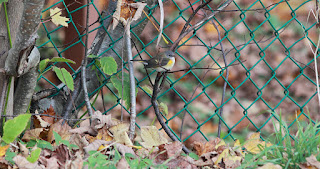 This typical warbler habitat in November, bare branches, dead leaves and a chain link fence.
Posted by Bruce Mactavish at 16:31