Ash-throated Flycatcher was a long time coming to my line of sight after birding nearly four decades in Atlantic Canada. Thanks to Jon Joy for noticing Newfoundland's second ASH-THROATED FLYCATCHER in his garden in Bonavista. Actually it was first glimpsed on 29 Oct but was thought to be a Western Kingbird. It was glimpsed once or twice more until finally Jon had a good look at it and secured photos of it sitting on the fence of his back deck on 31 Oct. Photos reached the outside world where it was confirmed as an Ash-throated Flycatcher. The news spread like wildfire among the Newfoundland birding community. The next day (1 Nov) Ken Knowles, John Wells and Paul Linegar drove up to Bonavista. They found it and secured some excellent photographs. A rare commitment at work prevented me from going until Friday.
Anne Hughes, Chris Brown and I drove the 3 1/4 hours to Bonavista in the rain on 2 Nov. We arrived at Jon's house just ahead of the line of rain. It was very windy but so warm. There is always a sinking feeling when you arrive at the location of a rare bird and don't see it right away. The wind and dark damp sky was not ideal for finding a passerine in an open area. We stalked the area carefully peering into dense ornamental shrubs thinking it might be seeking refuge from the weather. The circle of searching grew wider as hopes of finding this bird dimmed. I headed toward a large abandoned cinder block building looking for a place to relieve my bladder. The north side was out of the wind and view from Bonavista residents. I was standing waist high in the alders enjoying the release when I glimpsed a bird fly into the alders 15 m in front of me. I moved forward and a yellow breasted bird with a reddish tail popped up flying a few meters before landing on the top of dead stick. IT WAS THE BIRD. Instant relief [again]. I tried to maneuver for a full view but the bird flew up. It shot past my ear and headed toward Jon's house 120 m away. The rest is history.
We had the bird for 30 minutes, though it was in sight for less than half of that time. It fed in Jon's and the neighbour's yard. It was very active and spirited. It would sit on a perch for a short period then zip off to a new perch. It was often in the open and acting more like a kingbird than I expected from a Myiarchus flycatcher. Every time it moved we had to relocate it. It was seen picking objects (insects?) off a fence and ate one small caterpillar.  Photo opportunities were brief and not close.  The binocular views were good. 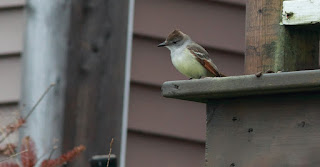 The pale ashy-gray throat and breast blending into the faded yellow lower breast and belly is the first thing eastern birders want to see when separating the Ash-throated and Great Crested Flycatcher.

The Ash-throated Flycatcher flew to ground in this raspberry patch and found food items. 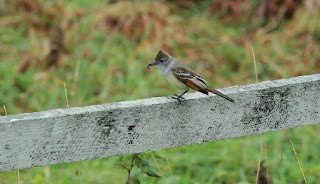 Here the flycatcher has a small caterpillar that it bashed several times on the fence before swallowing.

Sometimes it perched in a tree looking around at the foliage like a vireo would do. 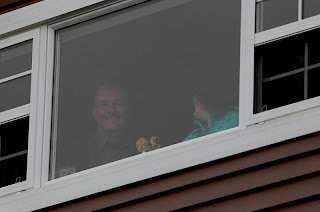 Jon and Brenda found it amusing to see us creeping around their property looking for the Ash-throated Flycatcher.
Posted by Bruce Mactavish at 17:28