After a long long long hard winter of major snow and a very very very laborious opening to spring, May was like an opening of every birders heart. Those first Yellow-rumped Warblers were Godsends. Every new returnee had its own little pleasure.  It was not a spring for Icelandic vagrants. It is a rare spring when not a single European Golden Plover was seen.  Though a Northern Lapwing at Bonavista in late May was out of pattern for spring weather and for the species' history of occurrence in the province. We figured it was a bird that must have arrived in the fall of 2019 and over wintered somewhere in North America and was on its way back home.  Good luck to that bird.

This blog is only about the birds that I saw in May. There were other good birds that I would have like to have seen, especially the Little Egret on the Burin Peninsula, just four hours drive one way, but we've had great encounters with that species in recent years. 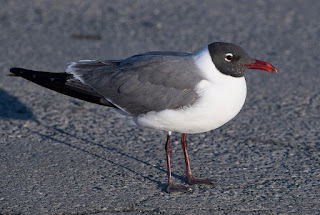 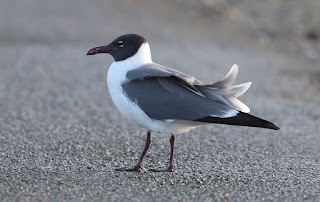 A Laughing Gull never gets more praise when it is an adult in high breeding plumage landing in a place where birders are recovering from Severe Winter Weather Weariness and Lack of Avian Novelty (SWWWLAN).  The first bird was begging for doughnuts around cars parked out behind a Tim Horton's outlet providing excellent views.  The second bird was waiting for more of my chicken sandwich.  Nice when the gulls come to Newfoundland already trained. 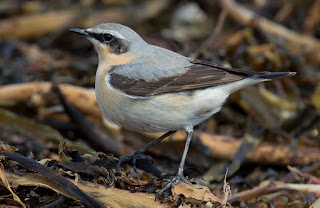 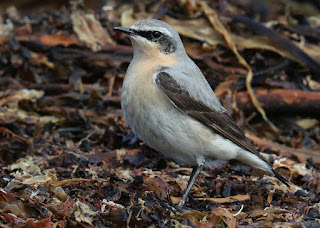 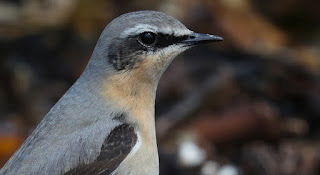 This Northern Wheatear (a 1st spring male?) found on the kelp bed at Bear Cove, Avalon Peninsula on 12 May by Alison Mews was one of about six wheatears reported during May in Newfoundland, On my second visit to the bird I had a lucky 15 minutes when it came to me while I had the beasty lens (840mm) attached to the camera while on tripod and standing over my ankles in a ravine among rotting kelp bed. The angle of the sun was far from ideal but the end result is some of my best wheatear pictures ever and The Photo Session of May 2020 Award. 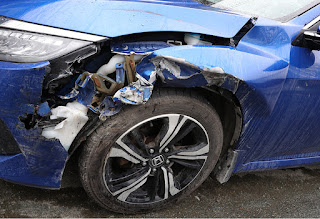 On 15 May disaster struck. Over night my car parked in front of the house was the victim of a hit and run.  Insurance saved a $$ disaster but there was set back in mobility. I did get a rental car from the insurance but lost a three weekend while waiting for that to happen. And now on 9 June as I type I still don't have the car back which is upsetting early June plans to be part of the birding blitz currently taking place in the Codroy Valley. As you can tell I drive a Corvette - not! --- just a Honda Civic but equipped with Turbo crucial for passing painfully slow cars on winding, hilly Newfoundland roads. 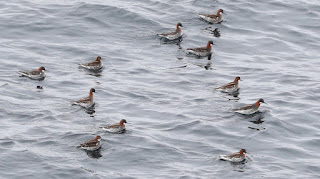 Not so much a rare bird but a beautiful encounter with Red-necked Phalaropes in spring. It happened at Ferryland Head on 17 May.   About 65 equally divided between females and males. They were feeding close to shore. It was a hard shore to get down to the waters' edge. So I sat on a bluff snapping picture with a 400 mm lens while a 840 mm lens was in the trunk of my car 1 km away (DOH!).  I did have my scope and soaked in the fabulous views during my nearly two hour encounter. 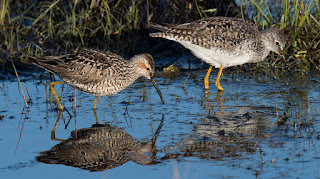 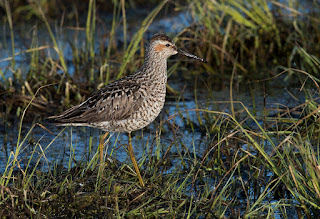 A Stilt Sandpiper at a little wet spot on the Back Line, Goulds was a first spring record for the island of Newfoundland 24-25 May. It occurred after a few days of strong far reaching SW and W winds. It is rare enough in the fall being recorded just less than annually. Interestingly there was a small influx of Lesser Yellowlegs at the same time. 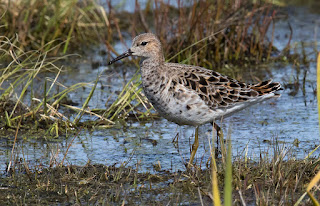 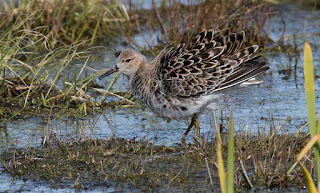 This female Ruff took the place of the Stilt Sandpiper at the same little pool of water on the Back Line, Goulds for 26-27 2020. Ruff is a bird I enjoy looking for in the spring at a few attractive looking wet spots suitable for a Ruff.  They never get old whether it is a male or female. 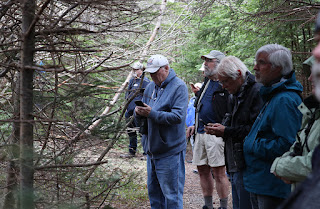 Birders getting bored waiting for a Wood Thrush to sing at Kent's Pond. St John's on 28 May. Such an unusual record being  found at a city park (by Alvan Buckley) and singing.  It was singing sporadically at a cut volume.  I heard and saw it the next morning. This was only about the seventh  record for Newfoundland. 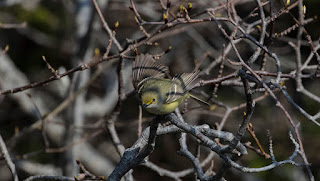 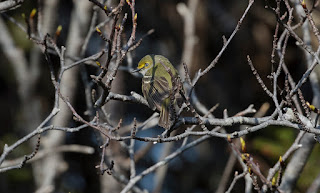 My Favourite Record of May 2020. I was the only person to see this bird on Powles Head Road, Trepassey area on 29 May 2020.  It was unexpected being a first spring record for the province, but the roof blew off the theater when it started to sing!! And it sang and it sang. 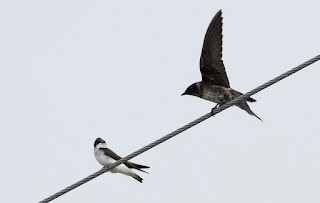 All swallows, but the Tree Swallow, are rare on the Avalon Sensualist. Barn Swallows stray with some volume in May.   Up to 20 were seen at one location during this May. Purple Martins are royalty among the spring swallows. Two were present at the end of may at Bidgoods Park, Goulds. Here is one landing next to a surprised looking Tree Swallow.