For Canadian birders the warblers with a breeding range just reaching southern Canada are the daily stars of Pelee birding. This works for Newfoundland birder as well. The southern warblers we look for in September and October in Newfoundland are the same species at Pelee but are in brighter breeding plumage.


Kentucky Warbler is one of the nicest warbler gems to find in the Newfoundland alders.  I've also enjoyed them on their breeding grounds in a few places in the US.  It has always been a highly desired species.  It is never too late. I've been birding 50 years and finally I got my fill of Kentucky Warbler.  A male Kentucky Warbler in Tilden's Woods by one of the main trails. Like many birds it became accustomed to the gentle movement and regular passage of birders and eventually completely ignored them.  It went about its business hopping about the ground vegetation. Andrew, Ross Harris and I enjoyed this male on the first morning of the three days it exposed itself to the whole wide world without losing any dignity. 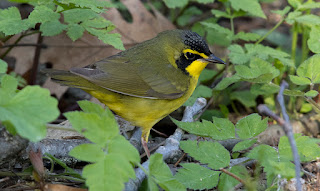 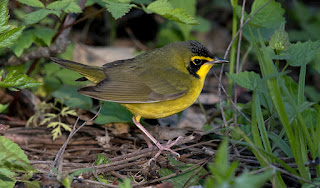 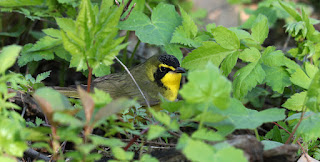 Prothonotary Warbler is one of those warblers with a no-fail stun factor. Andrew and I had a male to ourselves feeding around a woodland pool in Wheatley Provincial Park. The angle of the low sun was harsh but we really could not complain about the photo opts. We each took exactly 720 photos.  How do you stop when the bird wouldn't go away!?  We saw others during the week and came away with full satisfaction on Golden Swamp Warbler. 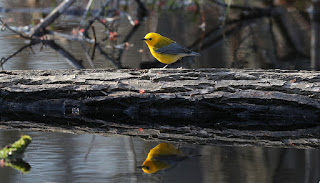 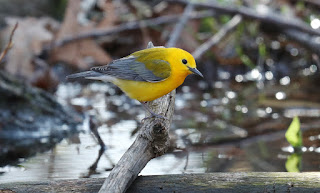 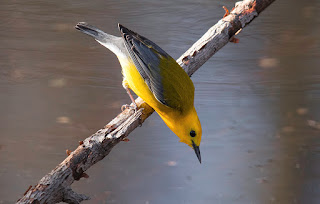 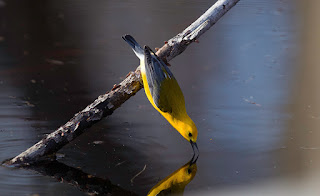 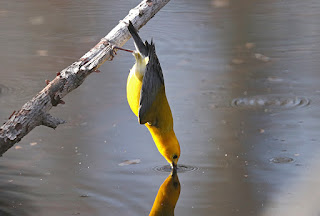 Hooded Warbler is a classic bird of the deciduous forest of the eastern US.  It is fairly well established in limited numbers in extreme southern Ontario. It is one of those southern classics that you bump into regularly as you bird all day every day during your Pelee visit.  Enjoyed great views but ended up with a small choice of photos to look through. 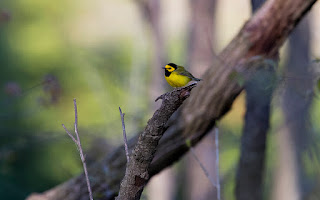 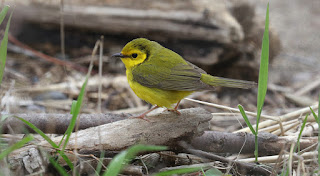 Blue-winged Warbler is one of my fav warblers. I've seen plenty in US and few in Atlantic Canada plus Ontario. I've experience a fill up on Blue-winged Warbler more than once. Andrew and I did OK on Blue-wings finding a few. In fact all the several we saw were self finds.  They are very jumpy and quick in their movements going from curled up leaf to curled up leaf hanging upside down chickadee-like looking for wrapped up insects that none of the other warblers are going after. Two different Blue wings here. 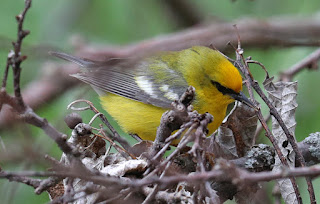 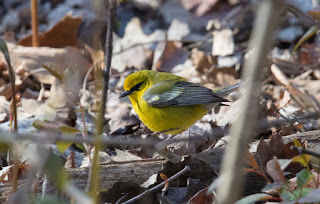 No photos of the one Cerulean Warbler, a female seen for 10 glorious seconds. We didn't see Golden-winged Warbler at Pelee but luckily had sensational views of one in Hamilton the day before we went to Point Pelee. 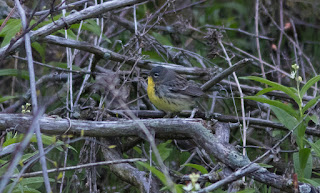 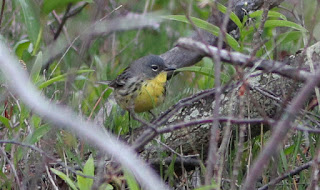 There were 2, or probably 3, Kirtland's Warblers present at Pelee during our week.  We walked 300 m down a deep soft sandy beach to see this one.

I arrived in Ontario o 3 May just two species shy of the 500 species in Canada milestone.  Shortly after landing at TO, Andrew and I located  #499,  a Fish Crow stake out at Bronte. It was more or less a given but we spent 2 hours in the general area before encountering a Fish Crow by its quiet double noted nasal call.  And this was thanks to a hot tip from Mark Jennings. We ran into an excited Mark at Bronte Bluffs who had just flushed a good gull off the shore that he thought was a kittiwake but was working out imperfections that his field guide showed = bill colour. It was a no brainer for a Newfoundlander literally raised on kittiwakes & gravy -  but what a great bird for May in Ontario! 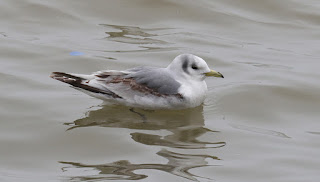 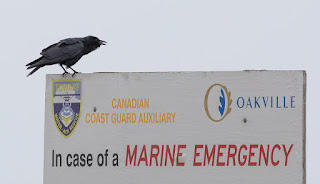 Fish Crow #499. Calling with a nasal 'ca-ca, ca-ca" at Oakville harbour.  A small population of Fish Crows is becoming established at the west end of Lake Ontario. Who would guessed that was going to happen just 10 years ago? (Photo Andrew Mactavish)

The table was set. All it would take was one good spring rarity at Pelee to hit the magic 500 plateau. On the morning of 10 May while at the tip of Pelee, the Pelee WhatsApp reported a SWALLOW-TAILED KITE over the Cactus Field heading south!!!!!!!!!!!!!!!  I was standing next to Steve Pike when the news hit. With confidence he said it would come down here.  OK.  Stay where I am.  There were lots of warblers feeding in the winter storm damaged uprooted trees on the east side of the tip but it seemed so trivial when people pointed out things like Chimney Swift and f***k**g Northern Waterthrush when eyes should be to the skies looking for only one thing - the most distinctive and spectacular raptor in the US.  OK I did take more than just a glance at stonking male Prothonotary Warbler that landed on a skinned out stump in front of me.  Then the WhatApps said the Swallow-tailed Kite was at the Sparrow Field! OMG  Yikes. Just on the other side of those trees to the north of where we all stood in anticipation.  The WhatApps went crazy over the next four minutes saying it was going south, flying north and circling over the Sparrow Field.  This was insane. So close yet so far. Last report was that it was going north.  What if it decides to head back up the point without ever reaching the tip!! I panicked.  I ran across the tip to the west side and started up the walkway toward the tram in case I was going to have to chase this bird and catch it before it left the park. Then behind me came screams from Andrew and Jean Iron.  Look UP!﻿ 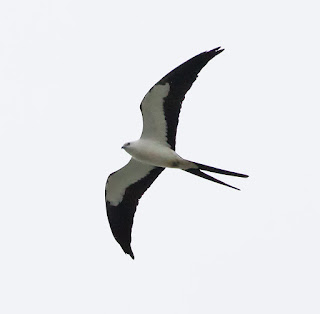 The Swallow-tailed Kite sailed directly over head. # 500 FOR CANADA. photo by Andrew Mactavish﻿ 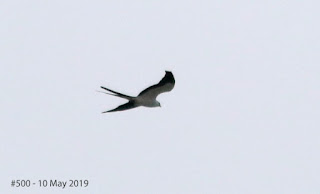