On 18 August 2018 Ken Knowles, John Wells and I were birding at L'Anse au Loup, Burin Peninsula, Newfoundland. This excellent location is birded less than annually because it is off the beaten track of Newfoundland birders.  We were surprised to see a breeding plumage Dunlin among the mixed flock of several hundred shorebirds.  A Dunlin in breeding plumage is a rarity in southern Canada during August.  Adults of the race breeding in the eastern Arctic (C.a. hudsonia) moult from breeding plumage to winter plumage while on the breeding grounds before migratin south in September and October.  We noted the surprisingly dull upper parts of the bird and the bill being on the short end of the spectrum for the hudsonia Dunlin that we see during fall migration.  It was the next morning before we had better views and secured some photos.

We suspected this was a Greenland Dunlin based mainly on the dark upper side that was so different from hudsonia. The scapulars and mantle feathers had large blackish centers. The only touches of orange colour were the lower scapulars. The race of Dunlin breeding in Britain, Iceland and s.e. Greenland is schinzii.  Farther north along the eastern Greenland coast the Dunlin get smaller, slimmer and have a shorter bill are called arctica.  There is much overlap between schinzii and arctica with only some at the extremes at the ends of the scale being safely assigned. Schinzii/arctica unlike hudsonia migrate south while in breeding plumage. They moult into winter plumage on their western African wintering grounds.

The pictures tell the story. In these picture note the dark back, black centered feathering in the scapulars and mantle, the lack of warm colours, the heavily marked head and upper chest.  The bill is on the short end of the for hudsonia. These photos are all from 19 August, 2018, L'Anse au Loup, Burin Peninsula. NF. 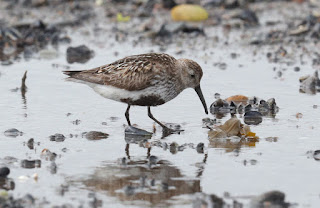 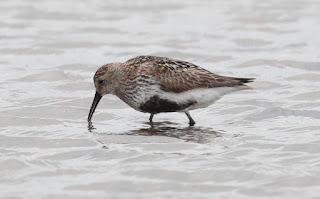 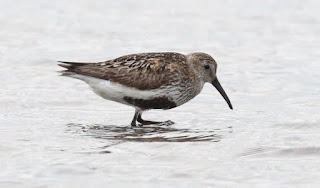 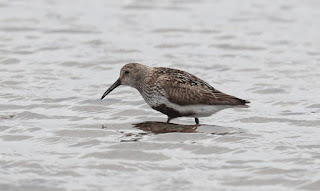 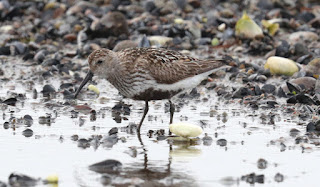 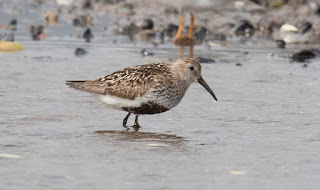 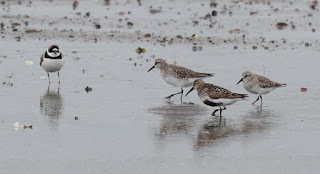 Size is not much bigger than these two White-rumped Sandpipers. 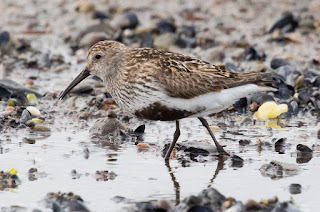 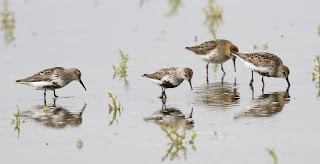 The middle bird being smaller, slimmer with a short bill is a good candidate for arctica. 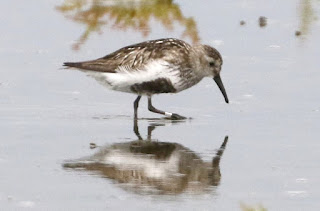 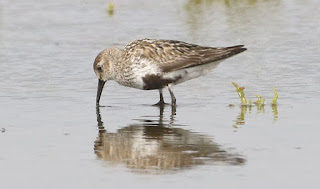 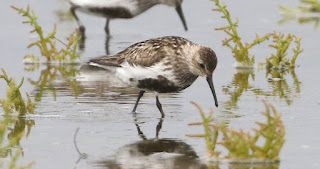 Previous records of Greenland Dunlin in North America? There are excellent photos of spring schinzii from Cape Spear, Newfoundland on 3 May 2014 taken by Peter Shelton during a major influx of Icelandic shorebirds (https://ebird.org/view/checklist/S18213552).  There are apparently good records from Maine, Massachusetts, Maryland and Bermuda (fide  M. O'Brien).  There are occasional sightings of adult Dunlin during August in eastern Canada.  These should be documented with photos.

Posted by Bruce Mactavish at 18:03