Thayer's Gull was recently demoted from full species status by the American Ornithologist Union. I think this was a mistake. The real Thayer's Gull breeding in the western Arctic is surely a different species than the white wing tipped Iceland Gulls breeding in Greenland. The population of Kumlien's Gull breeding in the middle, perhaps larger than the population of either Thayer's or Iceland Gull, is the problem.  I am in the popular camp that the Kumlien's Gull is a population of hybrid Iceland x Thayer's Gulls. I am not a scientist so I am not bothered by DNA or rules of provable species distinctions.  Thayer's Gull and Iceland Gull just feel like different species to me. The Kumlien's Gulls are T'weeners = hybrids.  I can live with that. Just like people in eastern North America deal with Golden-winged Warbler, Blue-winged Warbler and their hybrid forms named Brewster's and Lawrence's Warblers. Two distinct species and some interesting looking hybrids in between

The problem with identifying a bona fide pure blood Thayer's Gull in Newfoundland is that with literally thousands of hybrid Thayer's X Iceland Gull = Kumlien's Gull around there is going to be every gradation of field marks between the two species including some that might be close to identical to a classic Thayer's Gull or Iceland Gull.  I have some personal experience with bona fide Thayer's Gulls on breeding grounds in Pond Inlet, Baffin Island, and in the NWT, especially Inuvik during spring and fall migration. I always got the same feel from these birds being a little more Herring Gull like in build and demeanor.  To my senses they seem more closely related to Herring Gull than Iceland Gull.

My take on seeing a Thayer's Gull in Newfoundland is that it is near impossible to know even if the wingtip pattern meets the criteria for Thayer's. Typically such birds appear like Kumlien's Gull in shape and may have a less than dark eye. Of course some Thayer's are known have palish eyes.  The arguments become impossible and a waste of time because there is no cut off line where you can say this is definitely Thayer's or just a Kumlien's.

The bird below would pass all the Thayer's wing tip tests.  It seems small headed and has a only half dark iris.  It has the wingtips of a Thayer's but a body of a Kumlien's to my way of thinking.

These photo below are from 5 March 2018 at Quidi Vidi Lake, St. John's, Newfoundland. 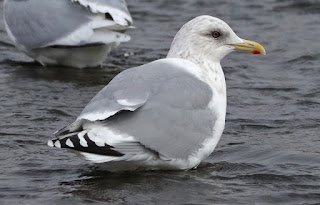 Note purplish-red orbital ring typical of both Thayer's and Iceland but different than the yellow-orange of Herring Gull. The iris is heavily speckled and about average for Kumlien's Gull but paler than most Thayer's Gulls. 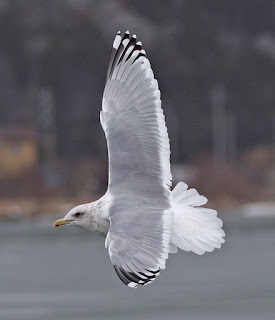 The dark subterminal band on P10, continuous dark leading web on P9 and the dark mark on P5 are the most important features when deciding on a Thayer's Gull. Having all three key marks on the same bird plus plenty of dark gray on inner webs of P10 and P9 make this a perfect Thayer's Gull wing tip pattern. 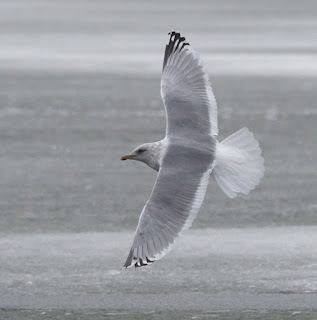 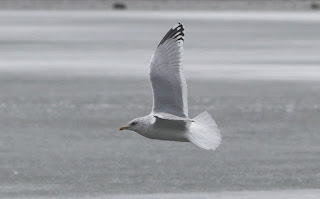 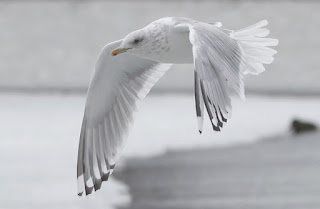 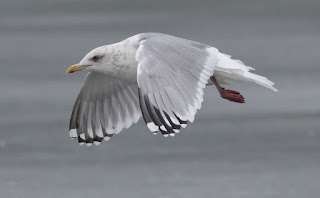 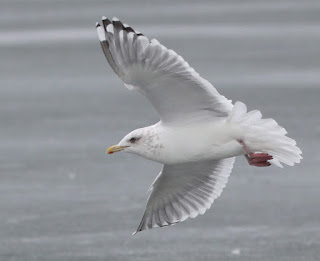 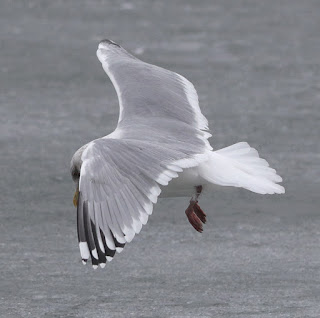 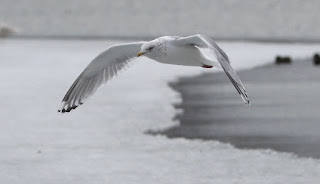 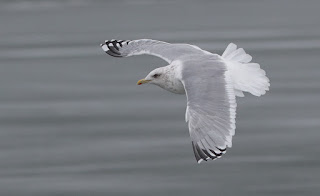 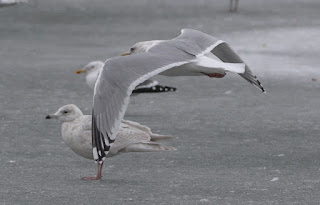 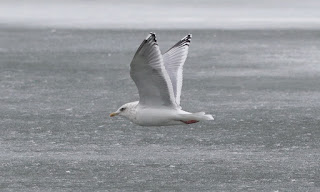 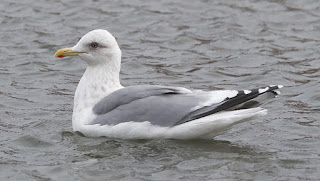 MARCH 24 2006
The gull below was watched by Jared Clarke and I at the St. John's dump on 24 March 2006.  The sheer size and strong build of this bird plus the very dark eye scream out Thayer's Gull according my standards which are not perfected or universally accepted by any means. It fed among the Herring Gulls in the garbage unlike the very few Kumlien's Gulls that entered the landfill back in those days and sat back around the fringe rarely actually going into the main feeding area.  The wingtip pattern just makes it into the legal Thayer's range. There was a small dark mark on P5 that is washed out in this slightly over exposed blurry flight shot.   This is one of just two or three gulls in the St. John's area that I had a good feeling was a pure Thayer's Gull after 35 years of gull watching. 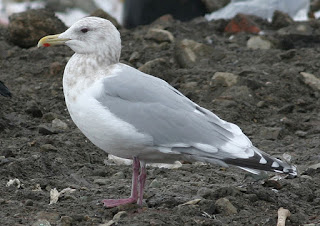 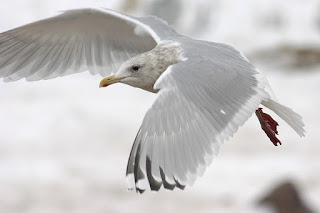 Posted by Bruce Mactavish at 06:33