A Slaty-backed Gull Comes To Town.

On Friday 17 March 2017 on the way to work I stopped at Quidi Vidi Lake as I usually do. With only 30 minutes to spare and being such a nice morning I decided to walk out to the bench to sit down and listen to the singing Song Sparrow.  This worked out. The Song Sparrow was making use of the nice  nearly spring-like, calm morning to sing.  Ethel Dempsey came by.  As we chatted I scanned the little flock of gulls out on the ice edge. Ethel's voice suddenly became long distance when I saw a potentially hot gull. It looked too small for a Great Black-backed Gull. It wasn't a  Lesser Black-backed Gull because the legs looked too pink. .  I yearned for my scope left at home not expecting to need it with so little time on the way to work.  I looked some more. Initial impressions were of a nearly LBBG-like bird with bright pink legs and oddly there seemed to be a fair bit of head streaking which was a little unusual for the time of year. The bird was asleep with its' beak shoved into its back and facing away. it was not close.  I informed Ethel that there was a potential alarming gull in front of us.  We gawked at the bird but could not gain much additional information from the sleeping bird. Needed to see that head come out.  Meanwhile I made a dash back to the car to get my camera just in case this turned out to be what it was pointing toward.

Not wanting to sound the alarm on a bird we weren't sure of we texted a couple of people to just make them aware there was a potential mega in out midst. Then it woke up and started preening. The pale bill, the heavily streaked head, dark smudge around the eye = SLATY-BACKED GULL.  It was the real thing.  The phone calls and texts began in earnest.  While in this process there was an unplanned for flush of gulls by a passing eagle. We missed getting a photo of the open wing. The identification was already clinched but getting a  photo of that 'string of pearls' would have been sweet.

The Slaty-backed Gull was seen next on Saturday at 4 pm by Lancy Cheng. He had some good looks and got the first images of the 'string of pearls'.  Today, Sunday, Quidi Vidi lake was monitored on and off. It was such a beautiful calm sunny day that birders were scattering around outside the city.  At 1:30  pm John Wells found the bird on the ice at the west end of the lake.  A half dozen birders who happened to be by the lake at the time got to see the bird. I heard about the bird too late.  I got there just after an eagle had flushed the gulls.  A couple of hours at Quidi Vidi Lake and checking other gull hang outs produced nothing so I went home.  Five minutes later Lancy Cheng texted the Slaty-backed Gull was back at the lake, it was at the west end and close. I got back in the car.

It was a glorious 30 minutes with the gulls on the ice. The sun was low in the west and the bird was in the east. It was preening madly like it had never seen fresh water before and never had a real chance to clean itself.  The camera clicked madly. Others arrived and ticked and clicked.

Below are some of the results. 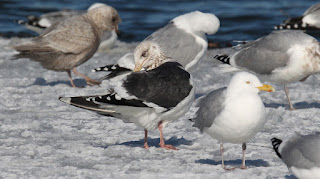 The first 200 pictures of the Slaty-backed Gull. 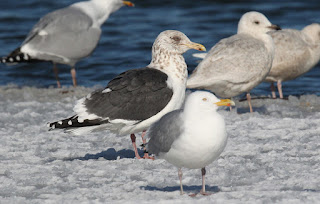 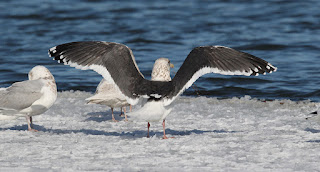 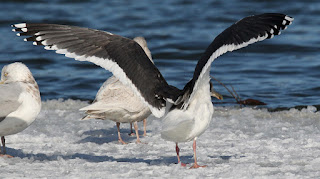 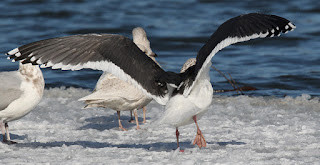 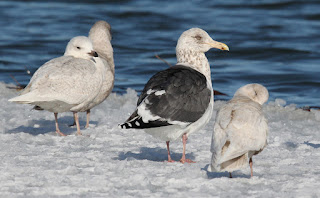 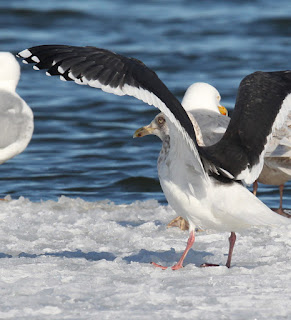 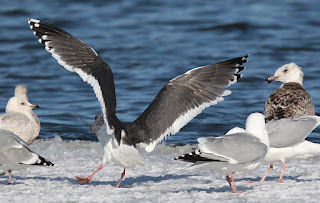 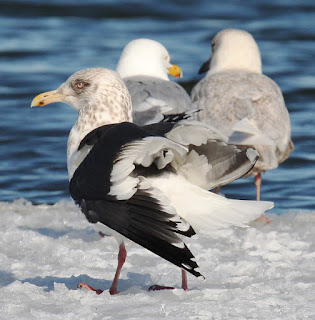 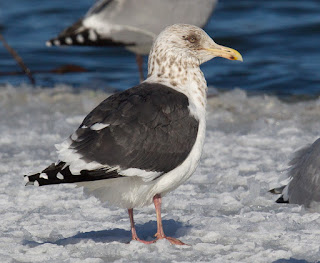 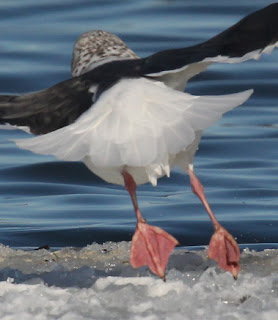 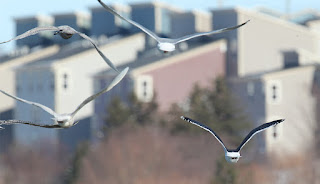 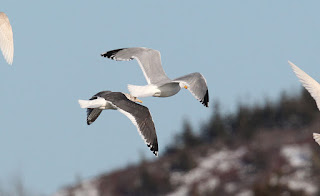 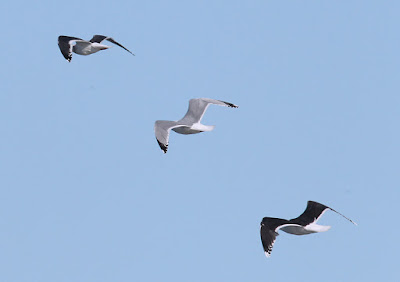