There is something about an adult drake Eurasian Wigeon that I find irresistible. The burnt orange head and silvery gray body must have something to do with it. The trim and tidy, smart looking, rounded head and agility on their feet are attractive features of both American and Eurasian Wigeon.  Most adult drake ducks in full breeding plumage when studied intimately are works of art but there is something about the colour combination of the adult drake Eurasian Wigeon that just melts me.  Always been that way since I saw my first one in my mid-teens in southern Ontario. I was in a car packed with birders on the way to a May weekend at Point Pelee.  It was a stake out along the way. We had time for only a brief look.

Many years later I was in another car packed with birders driving back roads in the marshlands of the Netherlands looking for White-tailed Eagles. It was winter. There were lots of waterfowl in the half frozen ponds including Eurasian Wigeons by the flock. It was painful to drive by everything in search of one species of bird. Finally there was a pond so close to the road, so full of wigeons that I blurted out - "can we stop here for a quick look".  Slightly perturbed for the stop when they realized all I was doing was looking at the wigeons, I felt better when someone mentioned that when  the famous bird illustrator from Sweden with the initial LJ was here last month he wanted to look at wigeons too.  LJ was probably more interested in the finer details of distinguishing 1st winter from adult females or something like that for his next master piece, where as all I was doing was soaking in those burnt orange heads and silver gray bodies. It was like eating a drug.

We are blessed in St. John's to get a couple dozen or Eurasian Wigeon every fall. Most of them try to over winter. Some have to depart when there is too much snow covering up the lawns on which they like to graze on.  But lately, especially this year, wigeon are joining in with the other ducks eating bird seed and what ever people are offering the starving crowd.  Adult drake Eurasian Wigeon are generally the wariest and most difficult to see well among wigeon. Not they are that wary! This winter there has been a tame adult drake at Nevilles Pond and another at Powers Pond.  Females and young males are spread out more liberally among the city ponds and are easy to view around your feet wherever ducks gather in winter.

This week I spent some time with the Nevilles Pond drake  - a perfect specimen, and also a few minutes with the Powers Pond bird. 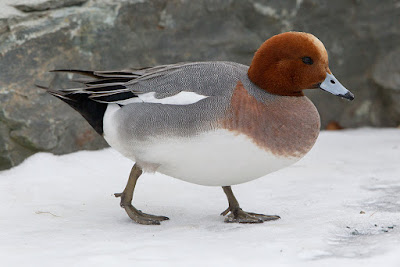 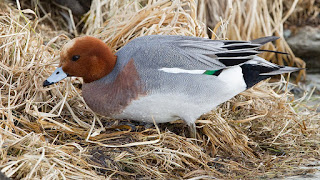 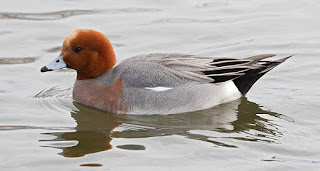 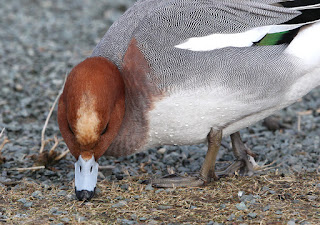 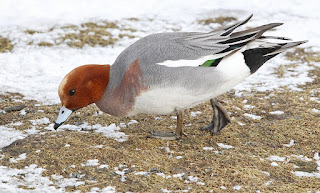 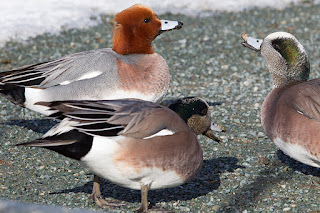 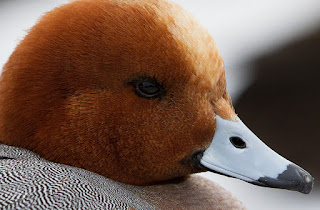 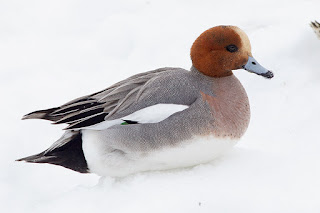 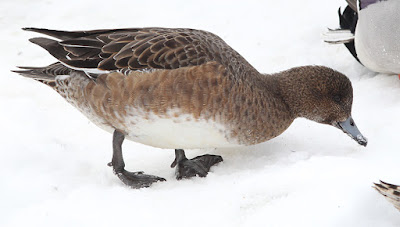 A flock of wigeon, a gray headed female American in the middle and rest Eurasian, at Spaniard's Bay on the west side of Conception Bay.  This area supports the most Eurasian Wigeons during the hardest times of mid winter. These are a wary group. Photo: 28 Dec 2015.