The Snowy Owl Event - Supporting Proof of Our Worst Fears

Today Rene Pop of Texel, Netherlands sent me interesting information on Snowy Owls that relates directly to the fate of the Snowy Owls that took part in the huge influx on the Avalon Peninsula in late November/early December 2013.

We all wondered about the fate of these owls crowding the southeast corner of the Avalon Peninsula. The weekend of 7- 8 Dec was the peak of the wave as far as we could tell. 300 Snowy Owls were counted that weekend at Cape Pine and Cape Race.  We couldn't get out to these Capes after that time due to road conditions. It was not just food that was concentrating the owls at Cape Race. The barren rocky ground around the area is poor habitat for meadow vole.  Snowy Owls will eat small seabirds and we've seen the evidence found in past years at Cape Race, i.e. Dovekie parts in pellets.  But there was no way there were enough seabirds around Cape Race to support hundreds of Snowy Owls. 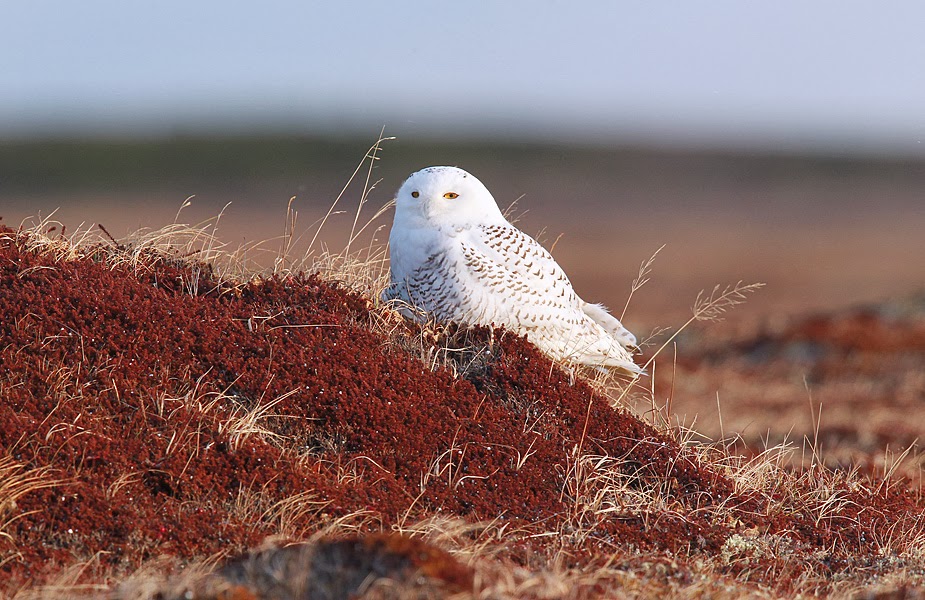 What ever happened to this Snowy Owl and numerous associates on the coastal barren along the Cape Race road after 8 Dec 2013?

We suspected the owls were on the run from food exhausted locations in the Arctic.We also suspected that since the birds, nearly all heavily barred (no white adult males noted) were inexperienced juveniles. We suspected Cape Race was a last resort land stop before taking your chances on going further south.  From Cape Race we saw a few owls coming in from the south and landing on the rocks with drooping wings.   Saw a group of three owls venture southward out over the ocean, one turned back, the other two kept on going.  Saw one or two others flying strongly high and southward.

During that dramatic 300+ Snowy Owl weekend there was word of a number of Snowy Owls on the oil rigs 300 km east of Cape Race and various fishing boats at sea on the Grand Banks and off southern Newfoundland.  It just came to light today that a container ship travelling from NYC to Netherlands during the second week of December 2013 transported some Snowy Owls across the Atlantic.

The story is can be seen on site below and is translating from Dutch to English using Internet methods.  The crux of the story is: 9 Snowy Owls landed on the ship on 9 Dec when 50 miles south of Newfoundland. The ship looped southward toward the Azores to escape the storms.  The Snowy Owls on the boat was down to four birds when 50 miles off the coast of Spain on 12 Dec. Two birds were thought to have flown toward Spain. By 15 Dec as the ship approached the Netherlands the last two Snowy Owls flew off the boat.

The whole Story as translated from Dutch to English via computer is below.

On the web site address provided below there is a powerful picture of six desperate owls sitting together on a containers in the mid Atlantic.

"I'm on 15 november in Antwerp went on board as a passenger on the MSC Monterey, a container ship of 275 metres. The tour went to the East coast of America where we New York. After we had done the various ports to unload and load we left december 7, back towards Europe, Bremerhaven. The weather was already bad and soon throughout the trip we sat in a squall. On 9 december we carry about 50 miles of Newfoundland where we visit got from 9 snowy owls (2 males and 7 females). They appeared exhausted at the containers and then to sit close to each other, somewhat sheltered for the corresponding sea spray. Unfortunately we carry with a speed of 19 miles still further away from their habitat. The following days the weather was slightly better but the owls remained. So every now and then they flew shearing across the water looking for prey and then to land on the ship. Now no more close to each other, but when spread over the bow. 11 december, we come near the Azores and the temp. is 15 degrees plus. Not really a pleasant temperature for these owls and a heavy swell with 20 degrees of heel. You notice that they are impatient and hungry. december 12, we come close to Spain, it was the night, when the ship got rampage. The owls family, Right away 5 more, are still on board and the occasional flying there one or two a while brushed over the waves. The temp. today is 18 degrees and we swing Meanwhile 25 – 30 degrees, not enjoyable. december 14th, we sail along France (approx. 50 miles off the coast) and the family owls is getting smaller, hopefully they have reached the coast or have them chosen for another voorbijvarend ship. december 15th, we sail along Zeeland and the last owls leave the ship. I think the two were. These will certainly pick up the coast. So far my encounter with the snowy owls. "