INCREDIBLE RARITIES Out of Reach

On the evening of 4 Sept 2013 I was sitting in my room on a seismic ship far off the coast of Labrador.  A co-worker Sarah Penney on another seismic ship on the northeastern Grand Banks sent an email.  The subject line said. " Brown booby? " Sarah is a smart person. Give her any task and she'll figure out how to do it, but her knowledge of birds was very limited to say the least. As I opened the email  I was wondering what this bird was going to be thinking (hoping!) this really can't be a Brown Booby can it?  Below is the picture.  I felt like a wooden stake had been driven through my chest. I could have been on that boat!

Immature Brown Booby 4 Sept 2013 on a boat located on the Grand Banks of Newfoundland, approximately 300 km ESE of St. John's. Photo with an IPhone by Sarah Penney.
The was the second record of Brown Booby for Newfoundland. The first was in late July 2012. It was photographed on a tour boat at St. Anthony on the tip of the Northern Peninsula.  There has been an unexplained presence of non-storm related Brown Boobies on the eastern US over the last three summers or so. New Brunswick, like Newfoundland, had its second ever this summer.  It was in the Bay of Fundy in early August 2013 (Durlan Ingersoll) and this after NB's first just the year before, or was it 2011?   Whatever it is that is driving these Brown Boobies far north of their normal range may continue for another year or two. Barring the right hurricane, this is our only hope, and faint at that of seeing this subtropical seabird in Newfoundland.
Two days ago word of a possible Lewis's Woodpecker at English Point surfaced.  Where the hell flames is English Point? And when was this bird there and are we going to get to see the photographs?  The answers came swiftly thanks to Patsy (forgive me Patsy that I can't remember how to spell your last name!!). Patsy writes regularly about birds at her bird feeder in St. John's and about birds she sees during her summer sojourns to the Labrador side of the Strait of Belle Isle.  It was a friend of Patsy's named Dale Suley at English Point next to the more familiar place name of Forteau, Labrador who photographed a strange woodpecker in her yard on 6 July. The bird stayed around for about two weeks.  No bird is unmistakable but when someone claims to have photographs of a Lewis's Woodpecker the odds are high that is what it will turn out to be. 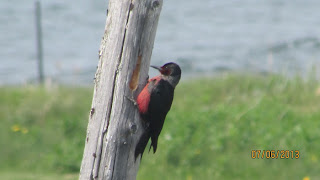 
A jaw-dropping rarity for Labrador or anywhere in the east. There is one other for the province.  Dave Fidler of Ontario found one at Cowhead, Northern Peninsula, Newfoundland in mid August 1986. It stayed a couple of weeks with a few fortunate birders (me!!!) getting to see this one.   There was one a few years back on Cape Breton Island, NS in early June at a bird feeder for a day or two. I don't believe there are any other records for Atlantic Canada.  Records of Lewis's Woodpeckers in eastern North America are few and erratic in nature with hardly a pattern of dates that would lead one to speculate why they went so far out of range.
What will be the next incredible rarity and will we have a chance to see it this time!?
﻿
Posted by Bruce Mactavish at 09:27