The first few days of June has a history of producing excellent rarities on the Avalon Peninsula, Newfoundland. For example Black-necked Stilt (St Shotts), Pacific Golden Plover (Cape Race), Brewer's Blackbird (Long Beach) and Violet-green Swallow (St. John's).  Something significant happened this weekend. There was a distinct influx of birds from the southwest that presumably came up on the rather gentle SW winds originating from the mid East Coast of the US. Most notably were swallows - record numbers of Purple Martin (3) and Barn Swallows (dozens).  While there was lots of evidence of an influx of birds from southwest of us there was no big rarity - at least not yet. I am expecting something to be reported from a feeder or a marsh over the next 48 hours that will send us running.
Here is a summary of the numerous mini rarities found over the weekend.
PURPLE MARTIN - one Cape Race followed by three at nearby Long Beach on June 1. There is perhaps an average of 1-2 seen per year in Newfoundland and sightings of more than one at a time are exceptional.
CHIMNEY SWIFT - one at Renews June 2 feeding low over harbour with swallows.  (a handful seen in the province in a typical year)
Barn Swallow - several dozen observed over the weekend including 25! at Renews on the morning of June 2.  The cold weather concentrated swallows desperately looking for flying insects. This one of the largest concentrations of Barn Swallows for the Avalon at least. Barn Swallow is a very regular spring and fall stray to the  Avalon but it does not nest on the Avalon and in fact might not be any more than a sporadic breeder anywhere in the province - usually Codroy Valley.
Eastern Kingbird - one Cape Race road, two Renews.  Regular late spring stray to Newfoundland. Rarely breeds in province, maybe just the one breeding record.
Indigo Bunting - two Cappahayden feeder, one Ferryland feeder. Regular spring and fall vagrant.
All these birds are 'southern flavour birds'. We need that bigger rarity to cap it all off. It is out there somewhere.  Below are some photos of the weekend highlights. Note the poor photo quality as is often case when getting the actual rarity in the spur of the moment. 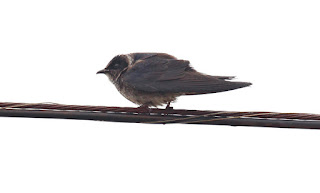 Purple Martin at Cape Race in the early morning fog. 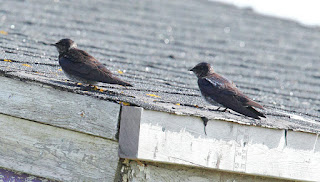 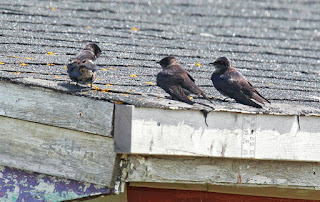 The three Purple Martins taking a rest from flycatching at Long Beach.  They are probably first year males in this mixed and messy plumage.

Chimney Swift at Renews feeding among a flock of Barn Swallows low over the harbour.  The temperature was about +6C and insects were scarce.

Two Eastern Kingbirds at Renews going pelagic in search insects over the warmer rocks ahead of the rising tide. 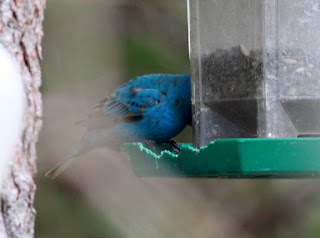 One of the Cappahayden Indigo Buntings. You don't really need to see the head to identify this bird! 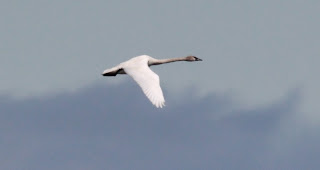 Not part of the weekend event but a highlight for several groups of birders was finally connecting with the elusive Tundra Swan that has been using the main pond at Portugal Cove South as part of its daily routine for the last week. This is true Newfondland rarity with barely a handful of records.

Posted by Bruce Mactavish at 05:11