In late winter the pack ice flowing south from Labrador reaches its southern most limit for the year.  In recent years this southern limit isn't much beyond Cape Bonvista.  The Avalon Peninsula doesn't see much pack ice these years, however the effects of the ice on the northeast coast is felt on the Avalon. The ice displaces large numbers of eiders forcing them to fly farther south. This week the ice was tight against much of the shore south to Cape Freels with fingers reaching Cape Bonavista. The first big flock of northern eiders has been at Cape Spear .


I visited Cape Spear before work on 19 Feb.  It was a windy (50 WNW) and cold morning so there was no one else getting out of the car which worked to my advantage as the eiders are wary of people.  I had not quite reached my sheltered seawatch location when eiders started flying in. I hit the dirt. They were landing off the rocks in front of me and I was completely in the open. Hundreds and hundreds, about 2000 in all.  Had they seen me? Apparently not.  Still exposed to the wind and the stare of the eiders I started looking from where I was.  It was still dusk with a heavy overcast light but the birds were close so the camera came out.  All those first shots were a waste.

For the next two hours I watched the birds feeding by the shoreline then swimming a few hundred meters offshore to start on the digestion of the urchins and mussels. Then they'd swim back into the rocks in long lines and start diving again in the white water.  Eventually I reached my sheltered spot and set the camera up on tripod.  The light was very poor.  Even experimenting with ISOs ranging from 800 to 2500, most of the 20 gigs of photos I took were garbage.  The views through the scope were excellent.  It is always a treat when the eiders are close enough to easily identify them to subspecies.  This flock was pretty pure borealis which is the expected race in winter.
The real reason we get excited by big eider flocks in late winter is because they nearly always contain some King Eiders.  This flock had six.  three adult male, two subadult male and one female.  The scope views of the drake Kings were fabulous at times.  Some of the photos worked out with a lot of cropping and teasing in Photoshop.  It was an enjoyable experience made possible by the inclement weather ensuring no one else walked down to the point which would have sent the eiders farther offshore if not flying away completely. There is something exciting about these northern eiders, and there will be more. 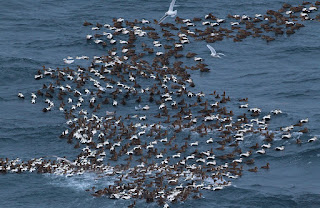 Part of the mass of 2000 eider moving in and out like a massive amoeba from the feeding zone by the rocky shoreline to the safety zone a few hundred meters offshore. 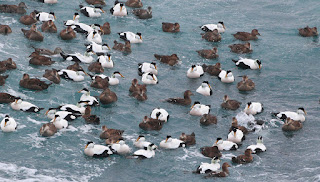 Close up the yellow to orange-yellow bills and narrow pointed frontal lobes identify these as borealis, the abundant race of Common Eider breeding in the northern half of Labrador and all through the eastern Arctic. 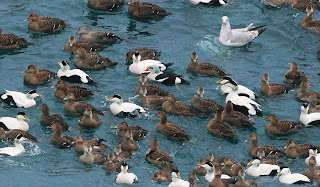 Drake King Eiders are the prize among the large flocks of late winter Common Eiders. 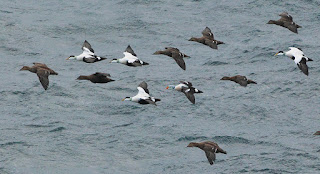 This King Eider shows black flecking in the 'shoulder' patch plus a sligthtly smaller frontal shield indicating this is a 2nd winter bird, one year away from being in full adult plumage. 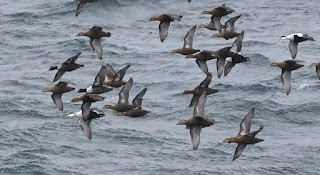 I didn't think there were any female King Eiders in this flock but I found  this one in a series of photos. Can you pick it out!? 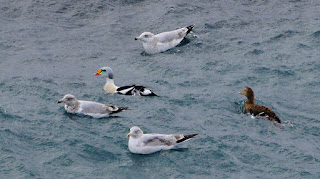 A full adult drake King Eider is hard to beat in the world of North American ducks.

Posted by Bruce Mactavish at 18:50